Three and a half years ago, I was a high school administrator in a high stress job and pregnant with my Vegas baby. I was none the wiser to the woes of new parenthood, and I had no idea what was in store for me. I was a conflict resolution pro with an opinion that could wake the dead. I had few friends with children, and had supervised several maternity leaves at that point with little to no emotion either way about it. It was a short lived leave and depending on the time of the school year, could be easy to fill with a fresh graduate, still wet behind the ears.

And then April rolled around. I was massively pregnant, swollen, and all around just a presence. I was ready to have this baby, but I had no idea what I was exactly in for. I hadn’t even considered the idea of not returning to my job in the slightest. I would take and ENTIRE 6 weeks completely off, plus another 6 part time here and there. (12 weeks is an eternity in school time when you are a stressed out administrator.)

She was born the day after I conducted interviews wearing a pair of slippers and yoga pants with a blazer to mimic a suit. My feet were far too big to fit in actual shoes and my belly was so massive that pants felt like I was wearing a medieval torture suit. Little did I know that the uncomfortable pant feeling would last through the yoga pants all day and actually be the beginning of labor. At this point, I was in wrist guards for carpal tunnel and support hose for swelling. I. was. a. hot. mess.

Then, life changed. All of those emotions that I never felt when supervising maternity leaves and watching colleagues parent were there. They were a flood. And that 6 weeks, FLEW. Absolutely flew. I cried the day I had to be away from my tiny baby for interviews at 6 weeks old. Though it was nice to get dressed and be back around adults, a part of me was missing.

I came back to work, and things settled relatively quickly. It became easier to drop her off at daycare, and my job was often times a welcome relief from constant talk with a tiny baby, barf, and explosive diapers. My mom was watching the baby a couple days per week which also made the burden of leaving a helpless baby away from me so much easier.

That winter, my mom’s cancer relapsed and all of my postpartum hormones got supercharged. For months, I knew that I needed more flexibility and if nature wanted to call me on it, this was it. My mom needed me and needed my daughter more than ever. That is when the path started to really shift. I was a career woman on a mission with no one slowing me down. I needed to do it all and I had to find a way to get it all done.

Around the same time, some really difficult stuff was happening at work. There were some situations that were so deep rooted and ugly, that even my stone cold opinion was breaking. I was a ball of stress and was coming home with severe back and shoulder pain from holding stress in my traps. Why  was I spending so much of my energy on stuff that I could not fix?

And thats when the search to guide my path happened. A whole lot of research later coupled with a few interviews for jobs I was overqualified for, and I landed on my current role. By February of that year, I was signing paperwork to own my own business that was family friendly. Though I had taken time from work so that my daughter could be the light in my moms life that she so desperately needed, WE needed something permanent. (Sidenote: The day after signing a contract to start my business, I found out that B was on the way!)

I took a leap. I started a business from scratch and here I am, nearly 2 years after my opening with a business that works. I am in the trenches of motherhood, and taking that role to the best possible level that I can. I get to take my kids to work at times, and I was able to make friends who are in the same situation as I am. Its a hard, get your hands dirty gig, but it is beautiful. I am busy 100% of the time, and as any small business owner knows, I work every. single. day. My “coworkers” (I refer to them as assistants: S and B) barf and poop on me at times. They whine and are messy and get into trouble, but they give the best hugs on demand and want to be by me 24/7.

Its hard, and there are a lot of tears at times. This week was an especially vigorous depth of Sh!ishow, but we made it through. Mid tears today, S stroked my hair and told me “slow down, mama. Its ok”. And I realized (which brought on more water works) that she learned this empathy from me being able to be home with her as much as I have been able. I work in pockets during the day as well as the times our wonderful nanny is here. I work almost every single night and every single weekend. But its worth it. This is way harder than I ever anticipated, but worth all of the blood, sweat, and tears it has brought on.

So thats my path that I chose. Rather, it chose me. It took my drive and passion for doing a good job and morphed it into the being of what I do now. Its a lifestyle. And as always, here is what I learned:

-Take the leap. This is a fleeting time in my life and I wanted to embrace it as best I could. I have my entire life to work for someone else if I so choose.

-Let your heart guide your mind as you wander into the world of choosing paths. I’m not a “heart” person by nature. I rarely show emotion, but when I do, it comes straight from the heart.

-Keep going. You know how many times I have wanted to quit? Way too many to count. But with the right support from dear friends, I have trucked on. And I’m so happy I can show my kids what dedication is when they are at their most vulnerable ages.

-The choices you make don’t always have to make sense. I was leaving the comfort of education for the unknown of business ownership. Really, most people would think I had no business doing that, but I did. It didn’t make sense on my resume, but it sure as heck did in my heart and each time I looked into S’s crystal blue eyes.

-Be patient. Rome wasn’t built over night. It takes time to build something, and though frustrating at first, the fruit is always sweeter when it is ripened.

To check out more about what I do and the leap I took, check out: http://www.lakezurich.fit4mom.com 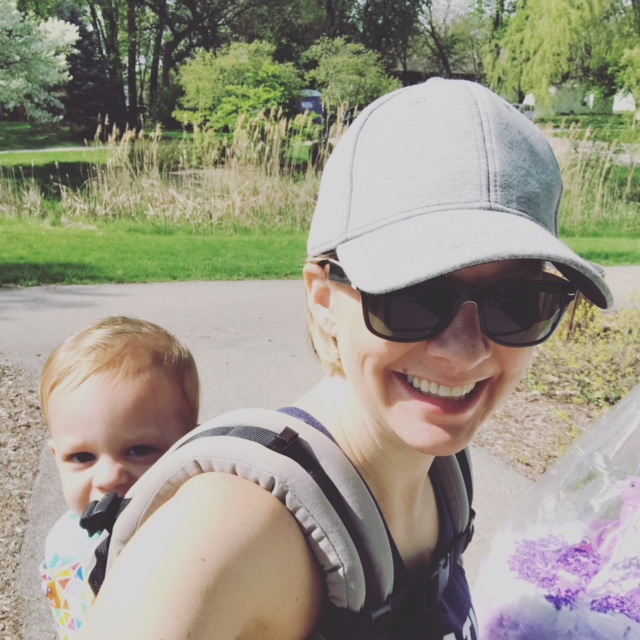 30 something mama of 3 looking to crush motherhood and share some stories along the way! View more posts